The yield return statement is probably one of the most unknown features of C#. In this post I want to explain what it does and what its applications are.

Even if most developers have heard of yield return it’s often misunderstood. Let’s start with an easy example:

While the above has no value for anything serious, it’s a good example to debug to see how the yield return statement works. Let’s call this method:

A first use case of the yield statement is the fact that we don’t have to create an intermediate list to hold our variables, such as in the example above. There are a few more implications though.

Let’s have a look at a different example. We’ll start with a traditional loop which returns a list:

These are the steps that are executed:

Now, let’s look at an example with the yield return statement:

At first sight, we might think that this is a function which returns a list of 5 numbers. However, because of the yield-statement, this is actually something completely different. This method doesn’t in fact return a list at all. What it does is it creates a state-machine with a promise to return 5 numbers. That’s a whole different thing than a list of 5 numbers. While often the result is the same, there are certain subtleties you need to be aware of.

This is what happens when we execute this code:

Now you might think that since both example behave exactly the same, that there’s no difference in which one we use. Let’s modify the example a bit to show where the differences lie. I’m going to make two small changes:

When we do this, the difference is clear. Following the previously described steps, in the case of the method without yield, the loop will never finish as it will keep looping forever inside the GenerateWithoutYield-method when it’s called in the first step (until it throws an OutOfMemoryException). In the case of the GenerateWithYield-method however, we get a different behavior. Because the Take-method is actually implemented with a yield return operator as well, this will succeed. The method only gets called until the Take-method is satisfied.

Another side effect of the yield return statement is that multiple invocations will result in multiple iterations. Let’s have a look at an example:

Read through the above code sample and try to predict what will be written to the console.

Because this is non-obvious behavior, tools such as Resharper will warn you about multiple iterations.

It’s pretty neat that we can write seemingly infinite loops and get away with it, but what can we use it for in real life? In broad terms, I’ve found two main use cases (all other use cases I found are a subclass of these two).

Let’s say we have a list of numbers. We now want to display all the numbers larger than a specific number. In a traditional implementation that might look like this:

While this will work, it has a disadvantage: we had to create an intermediate list to hold the items. The flow can be visualized as follows: 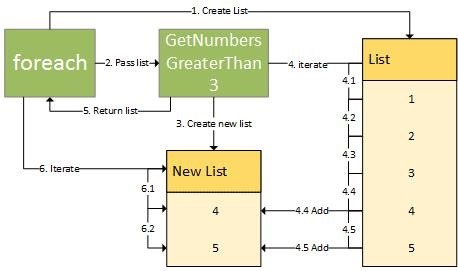 We can avoid this intermediate list by using yield return: 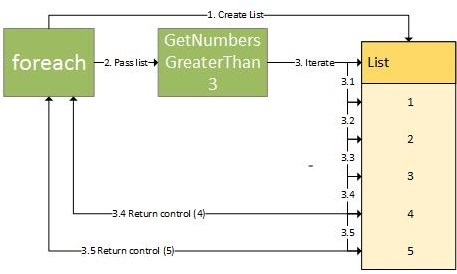 In this diagram it’s clear that we only iterate the list once. When we get to the items that are needed, control is ceded to the caller (the foreach-loop in this case)

Since the method containing the yield return statement will be paused and resumed where the yield-statement takes place, it still maintains its state. Let’s take a look at the following example:

The above code will output the values 1,3,6,10,15. Because of the pause/resume behavior, the variable total will hold its value between iterations. This can be handy to do stateful calculations.

All of the above samples have one thing in common: they only get executed as and when necessary. It’s the mechanism of pause/resume in the methods that makes this possible. By using deferred execution we can make some methods simpler, some faster and some even possible where they were impossible before (remember the infinite number generator).

Suppose we have 1000 products. If the above method did not have deferred execution, it would mean we would:

Because of deferred execution however, this can be reduced to:

While maybe a contrived example, it shows clearly how deferred execution can greatly increase efficiency.

Side note: I want to make clear that deferred execution in itself does not make your code faster. Inherently, it has no effect on the speed or efficiency of your code. The value of deferred execution is that it allows you to optimize your code in a clean, readable and maintainable way. This is an important distinction.

The yield-keyword is often misunderstood. Its behavior can seem a bit strange at first sight. However, it’s often the key to creating efficient code that is maintainable at the same time. Its main use cases are custom and stateful iteration which allow you to create simple yet powerful code. The yield-keyword is what’s powering the deferred execution used in LINQ and allows us to use it in our code. I hope this article helped explaining the semantics of the yield-keyword and the effects and implications it has on calling code. Feel free to ask any questions in the comments!

Last week I wrote about the yield return statement in c# and how it allows for deferred execution. In that post I explained how it powers LINQ and explained some non-obvious behaviors. In this week’s post I want to do the same thing

Last week I attended my first Open MVP day since I got the Microsoft MVP award. It was a great experience and I wanted to share what I learned and shout out to the great professionals I met there. For me, it’s an