In ASP.NET MVC, applications are divided into horizontal layers, which is reflected in the project structure:

It’s a good idea to divide you application into logical parts. While the idea of horizontal slices might look like a good idea, in practice I have noticed that it’s not necessarily the only way and more often than not, not the best way. Why not?

The following is a diagram of how a standard MVC application is structured: 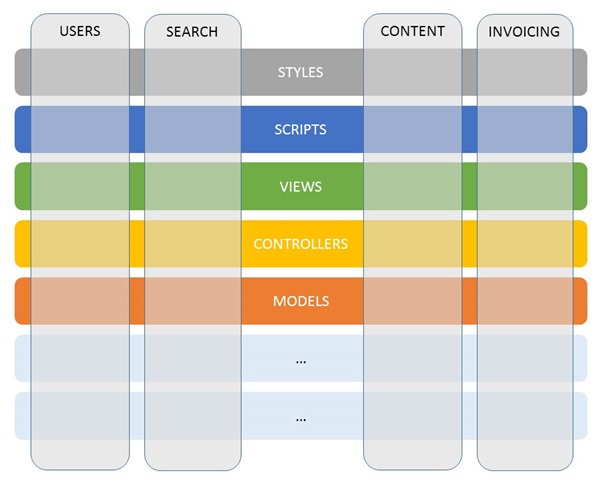 From the diagram above, you can see that our application has 5 layers (the standard MVC ones) and then probably a few other ones, depending on the application. Cutting through these layers are the features: all of them have styles, scripts, views, controllers and models.

There are a few reasons why this separation does not make sense:

A better way to structure an application would be in vertical layers. We want all code belonging to a feature to sit together in a vertical slice (also called a feature slice) so it’s easy to work on that specific feature. That allows us to work in a very tight scope and makes our solution explorer work for us, instead of having to swap between folders all the time. A more optimal structure would look like this:

In the above diagram, you can see that our slices are following the natural structure of the application. Furthermore, if we go one level deeper, we see that not all slices have controllers, not all of them depend on a domain (why do you need a domain model for content rendering?). That means we can tailor our code to exactly what is needed for that part of the application. A folder structure could look like this:

In the above folder structure you can see that:

I have used this structure in several projects and even though the code complexity is the same (you still need the same amount and type of code), I found that the perceived complexity is dramatically lower. Since the scope seems smaller, it feels like the application is just a bunch of smaller apps working together (under a shared structure, but still).

Even though ASP.NET MVC comes standard in a horizontal flavor, it’s actually relatively simple to change this.

If you use attribute routing, controllers are very easy, you can just move them wherever you want and they will still work. Yay, that was easy.

Another easy one, just move them around at will, change a couple of namespaces and you’re done.

Views are a bit trickier. By convention MVC looks for them under Views –> ControllerName or under Views –> Shared. To change this, we need to swap out the ViewEngine. That may sound difficult, but it’s actually rather simple. For the folder structure above, you can create the following class:

Once you have this class, you can substitute the standard ViewEngine with this one in your global.asax:

For scripts, we will have a shared part, which will still live in the default location (think about common modules for the entire application) and then there will be scripts that are specific to each feature. Those will live in the feature folders. Using ES6 modules makes this easy since you can use a bundler to bundle and minify everything. Because of the way modules work, it will automatically bundle all the scripts that are referenced from your entry point. Here’s an example of how something like that might work:

In the /scripts folder I have a file called app.js, which is my main point of entry. I trigger general modules from here and then based on the URL, I also trigger specific JS-files:

Once you have the main entry point in place, you can use Gulp to bundle and minify all of this into a single file:

I’m using JSPM here, but it would work with any other bundler.

For our style sheets, I’m also going to use Gulp. In this example, I will be using SCSS because it allows me to include other files. First of all, I’m going to define my main entry point, let’s call it style.scss, which will live under the /styles folder. In this file, I only include references to other files:

Note that I have used globs to include all files that are in the feature folders. This is not natively supported by most SCSS-compilers, but there’s a plugin (sassGlob) for Gulp that makes this possible (I’m sure there are plugins for Grunt as well, if you prefer to use Grunt). The following Gulp-task will make sure that all SCSS-files are combined, compiled to CSS and minified into one file:

I find feature slices to be a huge improvement over the standard structure of an MVC-application. With a bit of infrastructure code this is easy to set up and it makes working with large application a lot easier.

In the wake of the issue with NPM, I wanted to share my view and experience with dependency management. First of all, what happened? I’m not going to go too deep on what actually happened (there’s plenty of information about that), but

With the proliferation of REST API’s, external ones and internal ones (think microservices), we very often find ourselves depending on these external services in our applications. Usually we have